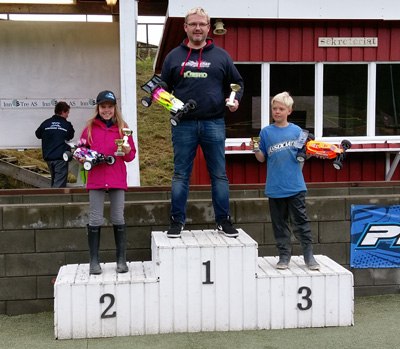 The fourth and final race in the 2016 Norwegian National Series 1/10 Buggy was hosted by Trondheim RC Car Club (TRCBK) this weekend at the fantastic astroturf track in Skogn.
During 2wd Saturday the weather was really good and the drivers could enjoy astroturf track racing at it's finest. Team Schumacher driver Roy Gjemble took a dominant TQ using the KF2SE, setting a new official lap record in qualifying as well. 2nd on the grid was the talented Xray driver Malin Karlsen and third on the grid was rCars driver Sindre Reitan with his Schumacher KF2. Also fourth spot on the grid was a Schumacher KF2SE, driven by the new talent Steffen Hjortshøj.

In the first of the triple a-mains Roy took a convincing win and even had the comfort of a victory lap in the end, setting the best 5 minute run of the day and the only 11-lap run. Malin took 2nd and Sindre was 3rd.

In the second A-main Roy made a fatal mistake early on and dropped down to tenth before recovering back to 5th. Malin took an easy win in front of the KF2's of Steffen Hjortshøj and Sindre Reitan.
Also in the third A-main Malin was able to make the pass stick and by that she took the overall 2wd event. The Schumacher KF2SE of Roy in second place overall and the KF2 of Sindre in third overall.
As this was the last race of the 2016 Norwegian National Series, also the overall 2016 prize ceremony for 2wd was held after the race. Still to be controlled and be declared official, the overall 2wd 2016 result for was:

Unfortunately the weather that was warm and sunny during 2wd on Saturday changed late night and turned into heavy rain. So 4wd was definitely a wet race event. It rained throughout all four qualifiers.
The young Xray driver Malin Karlsen, in her favorite class, was unbeatable in qualifying and took the TQ honours after winning the two first rounds of qualifying in dominance. After taking the TQ in qualifying in 2wd on Saturday the roles was switched in 4wd so Schumacher driver Roy Gjemble took the second place on the A-main grid with his K2 and another Schumacher K2, piloted by the talented Steffen Hjortshøj was number three for the A-main.

In the first A-main Malin was off for a good start but was pushed early on by the Schumacher starting from 2nd. During the first 4 minutes the positions switched a couple of times, but with about one minute left of the first main the positions was as they started. Just before one of the design elements of the track, the 4 meters high wall of death, is a pretty large size double which Malin overshot and was out of shape on the landing. Roy took advantage and made the pass. Disciplined driving from both drivers the last few laps meant that A-main number one was won by the Schumacher K2 of Roy Gjemble, 1/10th in front of Main and her Xray XB4.

The 2nd A-main was won by Malin after a start to finish brilliant drive.
This meant however that just as during 2wd on Saturday the event was still up for grabs for both drivers going into the third a-main. Behind the two front runners the young and talented Way-To-Win driver Alexander Gjemble, had put in a 5th and a 4th place in the two first mains.
For the last final the rain had stopped and the track was drying but still wet in some critical areas. Most drivers opted to still run the wet tyres for the last final as well, knowing the cars would be a bit edgy in the dry corners.

The 3rd A-main started almost the same way as the first two, but this time Roy kept even closer to Malin during the opening lap. And half way through the first lap Main overjumped the landing after one of the doubles, and as her XB4 landed a bit upset, Roy took advantage and managed to pass, cars touching front wheel to front wheel as the young Xray driver likely hit the throttle a tenth too early. A couple of mistakes more from hard charging Malin trying to catch up was all that Roy needed to comfortably take A-main number three with the quickest run of the day, 11 laps in 5:25, some 3 seconds in front of Malin. And from starting position 5, the young Way-To-Win driver Alexander Gjemble came in 3rd position, and by that he also came 3rd for the event.

After little to no practice on wet astro the Schumacher K2 was pretty easy to dial in also on the low grip wet track, and as soon as the track started to dry the K2's were brilliant! A big thank you to Schumacher for their support during the 2016 National Series campaign.