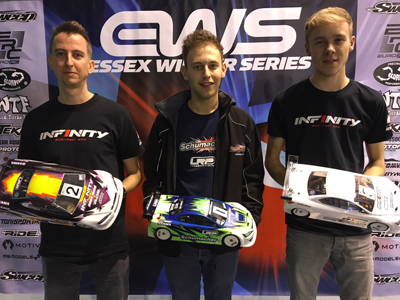 Elliott Harper with his Schumacher Mi6 took the win at this weekends Essex Winter Series event, making it two TQs and Wins from the two championship events so far, putting him solidly on track to retain the EWS title he claimed last season.
He opened qualifying with a battle with 2006 World Champion Andy Moore.  Andy came out on top in the opening qualifier, but after a few small tweaks to the setup of Elliott’s Mi6 chassis, he dominated the remainder of qualifying, setting the fastest time in the other three rounds and thus secured the pole position.  Behind Elliott, a tight qualifying battle raged, including BRCA National Champions Chris Grainger and Olly Jefferies and former Nitro TC World Champ Alexander Hagberg.  Also getting into the mix was Elliott’s team mate Paul Pinkney – Paul securing a very respectable ninth on the A Final grid against possibly the strongest field ever seen at EWS.

In the A Final, it was business as usual for Elliott, pulling a slight gap in the opening few laps over the field, as no one was able to find the speed to challenge him and his Schumacher.  Once a comfortable lead of 2 seconds had been built, Elliott focussed on running a clean race, to take the win and a second maximum points haul for the overall championship.

Elliott's set up sheet can be found here.