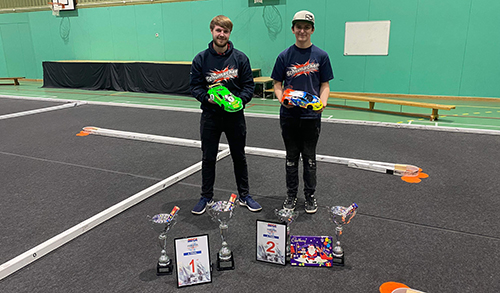 1/12th scale racing returned with the British Grand Prix held at Eastbourne electric car club. A great turnout of 25 GT12’s and 43 1/12th scales led to close racing all round.
Saturday had two rounds of practice and four qualifiers, with a further round of practice, two qualifiers and three finals for all competitors on the Sunday.

GT12
After two rounds of practice the top 5 drivers were separated by just 9 seconds with Schumacher's Nathan Goodban leading the way from Dan Robins, Mark Jewitt, Stuart Rand and Mark Fitzsimmons.
Qualifying was an equally close affair. Dan managed to take TQ in round 1 with Stuart a quarter of a second behind. Stuart hit back in Q2 beating Mark to the top spot with Dan dropping to P3 after a few mistakes. The only driver to get a 26 lap run, Dan Robins took TQ overnight. Nathan Goodban, Stuart Rand, Mark Jewitt, Ewan Thompson, Mark Fitzsimmons, Joseph Moore, Michael Hull, Stan French and Richard White completed the provisional A final.
Continuing on from where he left off Dan TQ’d the first round of qualifying on Sunday. Stuart managed to recover to P2, just over a second behind Dan. Nathan just pipped Mark to P3 by just under two seconds. The final round of qualifying would mix up the starting order. Mistakes from Dan and Stuart enabled Nathan to snatch pole position, whilst Mark managed to secure P3. Dan’s previous time was good enough for second.

Nathan was able to open up a gap as Dan, Mark and Stuart battled early in leg 1. Mark managed to pull away from Dan and charge after Nathan. A late mistake closed up the battle for second. A last lap mistake from Mark put Dan and Stuart right on his bumper. Remaining calm under pressure Mark was able to finish second, just ahead of Stuart in third and Dan in fourth.
Contact for Stuart at the start of leg 2 dropped him to the back of the field. A mistake from Dan on the first lap dropped him behind Mark, who made a mistake a lap later to give Nathan a healthy lead. Dan was back up to P2 and pushing hard to catch Nathan. A mistake half way through closed the gap between the top 2. With just over a minute to go Dan was within half a second of Nathan and piling on the pressure. Nathan made a mistake under pressure dropping him back to P2 just ahead of Mark. It looked like Mark would get a move done until slightly clipping a corner dropped him too far back.
Going into the last leg of the final Dan and Nathan both had a win, with mark still in contention with a second.
Initially the top four got a clean start in the last leg, but two slight mistakes from Dan dropped him behind Mark and Stuart. Another mistake from Dan a few laps later left him almost a lap down on Nathan, who had managed to pull a small gap on Mark. Mark and Stuart were battling hard and slight mistakes from both of them enabled Nathan to pull away. The gaps remained similar for the rest of the run meaning Nathan took the overall win.

Nathan's Atom 2 Set up can be found here.

1/12th
In 1/12th David Spashett dominated qualifying on Saturday taking TQ in all 4 rounds followed by Ollie Payne. Adam Mackman led the Schumacher team taking P5 overnight.
David Spashett TQ’d again in the first qualifier on Sunday but was beaten by Ollie Payne in the final qualifier who got pole position for the finals. A great run for Sam Coult enabled him to make the A final in 10th place.